Panic on the streets of Coventry

In the days leading up to the English Defence League's 'national demonstration' in Coventry, the notorious far-right wing group announced they wanted to "reclaim" what had become a "Muslim ghetto". In response to this, anti-fascism activists and disgruntled Coventrians made it clear to the EDL that their message of hate and division was not welcome. 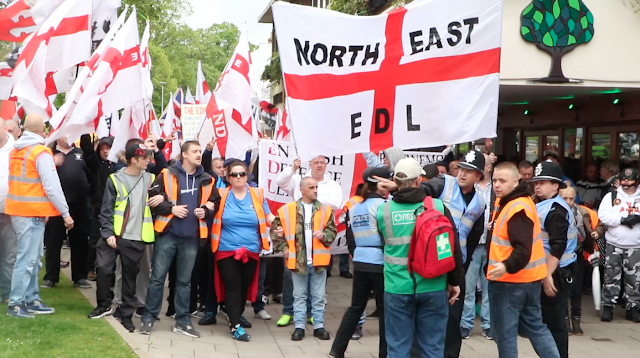 Welcome or not, over a hundred EDL supporters from as far north as Newcastle and as far south as Devon descended on Coventry - a city most of them knew nothing about - to tell all the white working class locals that they should be angry with their Muslim neighbours.

I was there to cover the day's events for Brace Club and alternated between the EDL's demo - confined to the edge of the city centre - and a counter-protest organised by Unite Against Fascism on the town square. The police meanwhile, out in huge numbers, attempted to maintain a semblance of calm.


The EDL, well aware of their public image as violent, knuckle-dragging hooligans, have made recent attempts to clean up their act. Messages on social media pleaded with supporters not to get too drunk and volunteer stewards in EDL-branded fluorescent jackets stood by at the demonstration, seeking to discourage anything that might paint a damning picture.

Unfortunately for them, their bigoted hate-filled rhetoric speaks louder than any attempt to be taken seriously. When regional leaders announce their disgust that a "bloody Muslim" can be voted as mayor of London and points to this as evidence of them "slowly taking over", their true colours come to the fore. 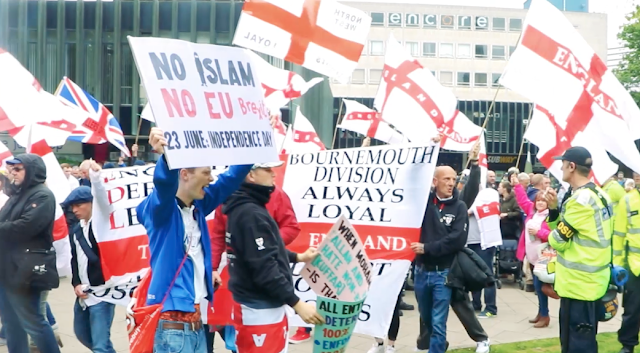 Meanwhile, the counter-protesters were keen to remind everybody that Coventry is "one of the most harmoniously multicultural cities in the country", and with that in mind, support from locals for the EDL was always going to be thin on the ground. Coventry, after all, takes pride in being the birthplace of the UK's ska revival in the late 1970's, with multi-racial bands such as The Specials preaching racial unity.

Raising concerns over Islamic extremism and talking about how to tackle it is not Islamophobic and labelling it as such cheapens the term when used to rightfully describe the actions of the English Defence League. Not only are they Islamophobic, they promote hatred, violence and disunity, and though the principle of free speech should always prevail their message must continue to be countered.

The short film I made for Brace Club in Coventry is online here:

Britain's dark secret everyone should know about

Just north of Bedford - quite literally in the middle of nowhere and surrounded by fields - lies Twinwoods Business Park: home to a pet crematorium, the world's largest skydiving simulator and, tucked around the back, Yarl's Wood Immigration Removal Centre. It's a very odd place.

Yarl's Wood looks like a cross between a prison and a conference centre; the sort of place you might expect David Brent to hire for meetings. Run by private firm Serco, it specialises in the detention of women, housing up to 400 asylum seekers and migrants at any one time.

I went along on Saturday to document a demonstration, part of a national day of action calling for the closure of the eleven detention centres around Britain in which thousands of detainees are held. Somewhat alarmingly, Britain is the only EU member state in which asylum seekers can be legally detained indefinitely without charge.

Some people, including women at Yarl's Wood, have been inside for years. Most having never committed even a minor crime. Despite accusations of poor conditions, sexual abuse and the branding of it as a 'torture prison' by former detainees, these privately run centres are allowed to run with little scrutiny and muted public outcry.

This is perhaps the most disturbing aspect of all, that these detention centres have somehow managed to retain an air of anonymity. Sufficiently out of sight and disturbingly out of mind.

Wherever you stand on the complex issue of immigration, you can't just ignore places like Yarl's Wood. You have to ask yourself where you stand morally on the indefinite detention of people fleeing persecution and wars, seeking a better life. And that's the crux of it for me: this shouldn't be a political issue. It's a moral one.

Check out the short film I made at the Yarl's Wood demonstration here:

Posted by Ryan Chapman at 14:12 No comments:

Simply put: Cuba is incredible, and you must go now. Incredible because of the people, their attitude to life and the island's Caribbean lushness. And right now, before up to 110 daily flights begin arriving from US airports.

I'm not saying American influences are going to taint everything that's wonderful about Cuba, I'm merely suggesting that you shouldn't wait to find out.


Right now, Cuba is a traveler's paradise, and it's the Cuban people themselves who are largely responsible for that. Take typical Irish openness, Islamic hospitality and Latin American warmth, put it all together and you'll have something approaching the average Cuban.

Add to that: you're on a Caribbean island, it's still pretty cheap and, if you avoid resorts, you have the perpetual feeling you're traveling off the beaten track. No wonder the secret is out.


The heart of Cuba beats to frantic Afro-Caribbean rhythms from rumba to reggaeton, but life itself is relaxed and unhurried. A Cuban's day is more likely to involve several games of dominoes than present any problems that kicking back in a rocking chair with a bottle of rum can't solve.

The truth is, Cuba is not the failing communist nightmare it's often purported to be. By providing a high standard of healthcare and education; subsidising essentials such as food and electricity; and fostering crime-free neighbourhoods, Cuba is clearly in a much better state than many other Latin American countries. Haiti and Honduras being the obvious examples to the other extreme, both struggling with poverty, inequality and violence.

I'm not saying Cuba doesn't have it's problems (democracy, for example, is an area that could use some work...) but you'd be hard pressed to find a happier bunch of people. Today - with the more pragmatic of the dictatorial Castro brothers in charge, and an improving relationship with the USA - change is rampant, and Cubans are looking to the future with cautious optimism.

"We like President Obama, but we will never forget the history. It's what makes us Cuban”, explained our host in the very town on the Bay of Pigs where the USA-backed invasion failed in 1961. "Sure, there are things we could do better, but there are big things we don’t want to change and I don't think we'll get a choice. America wants to own everyone."

Sorting fact from propaganda is something that's particularly precarious when dealing with the history of US-Cuba relations, but it's plain to see how the trade embargo has held the island nation back. However, with 191 of 193 United Nations member states recently condemning the USA for its continued stranglehold, Obama has been actively attempting to normalise relations. (Side note: the only country not to condemn the superpower, other than itself, was Israel).

Obama's efforts are welcome in Cuba, where many problems can be directly attributed to the blockade. "No one is homeless in Cuba, everyone gets housed by the state", another host told me between sips of rum, "but because of the trade embargo there is a shortage of building materials. So the government can't build enough homes and often four generations live under the same roof. Overcrowding is a big problem... mainly thanks to America."


It remains to be seen how this coming together of ideologies will impact Cuba: an island where poverty is seen as a social problem, with social solutions; an island where, as our host on The Bay of Pigs put it, "people have little, but share everything from the heart"; a communist-led island in a sea of capitalism whose people are proud of their socialist values.


Maybe the best of both worlds will prosper and a unique brand of democratic socialism will thrive, like some kind of Scandinavian-Caribbean utopian hybrid. Or maybe the once forbidden fruits of wealth and riches will prove too enticing and Cuba will become another territory of the United States of Capitalism.

Whatever happens, it's happening now.


If Cuba has been lingering towards the top of your bucket list for a while, I'd make it a priority and plan that trip, while keeping these things in mind:

Most hotels in Cuba are rated from average to awful, but casa particulares (somewhere between a home-stay and a bed and breakfast) allow you to stay with locals, put your money directly into their pockets and enjoy the fruits of Cuban hospitality first hand (quite literally: the fresh fruit at breakfast was a consistent highlight).

We didn't stay in a casa that wasn't excellent, but we did research them first using sites such as www.cubacasas.net and the old favourite, Trip Advisor. I'm sure there are bad ones around, but avoid them by booking ahead.

Varadero receives more tourists than anywhere else in Cuba, but it's about as Cuban as a steak and ale pie. Most people come here - or other resort towns on the north coast - and don't leave. Yes, the beach is exceptional, and yes it's worth a day or two, but if you want to experience Cuba any day spent in Varadero is a day wasted.

If you insist, at least stay in a casa particular.

Assume information is out of date

Things are changing so fast you need to take everything you read on the internet and in guide books with a pinch of salt because it's probably out of date.

Viazul buses are clean, comfortable and air-conditioned. They're also far cheaper than hiring a car. The only downside is being bound to fairly irregular services (often one departure a day), but if you have time on your side the bus is the way to go. Don't even think about the train.

Fall in love with La Boca

La Boca was my personal highlight. Cubans chill in the Caribbean shallows sharing rum and laughter; others smoke cigars and play dominoes on upturned cardboard boxes. Children climb trees, pausing on high branches to watch friends play football on the sand below.

As the sky begins to glow pastel shades of pink and purple, fishermen row out towards the horizon, silhouetted against the setting sun.

La Boca is a small fishing village just minutes from the relative bustle of Trinidad. Find your favourite rocking chair and spend at least a few days here. Adapt to the pace and allow it to soothe your soul.

Posted by Ryan Chapman at 15:34 No comments: