My Love-Hate Relationship with the World Cup

Following the frantic flapping of three terrorised doves desperately trying to flee the stadium's four walls of noise, the 2014 World Cup kicked off.

One of the three kids charged with releasing the birds - a stunt presumably arranged to symbolise FIFA's renowned dedication to world peace (!) - proceeded the act with a protest. As thirteen year-old Jeguaká Mirim walked off the pitch he held a sign aloft demanding land rights for indigenous people. However, unless you were there you wouldn't have seen it because the television cameras ignored it. After all, this was to be the World Cup of turning blind eyes and ignoring the needs, rights and desires of the people. Welcome to Fifaland.

The opening day of the World Cup provided me with a cocktail of emotions. By that point I had spent two incredible weeks in one of the most scintillating cities on earth, falling in love with it all over again having first visited back in 2007 - as an only slightly fresher faced traveller - on my first foray outside of Europe. The previous evening had seen Christ the Redeemer bathed in yellow and green light to mark the imminent arrival of the tournament and surely never before has such a simple gesture had such a huge impact on the mood of a city. Rio de Janeiro was positively buzzing, and it was infectious.

In the hours leading up to the much anticipated kick-off I attended two very different anti World Cup demonstrations. The first had a party atmosphere with samba bands marching through the streets accompanied by revellers in fancy dress shooting bubble guns and water pistols. The second had a far darker tone after beginning with the arrest of two activists, much to the anger of the gathered crowd. There were times in both when I didn't want to be branded 'just another journalist' and so put my camera away and got more involved. When I caught myself on the frontline shouting slogans against the violence of the heavily armoured military police directly at the heavily armoured military police I justified it by calling it immersive filmmaking.

I dragged myself away as Brazil's opening match approached and entered an entirely different world: The Fan Fest. Occupying a sizeable chunk of Rio's famous sands, this was the FIFA-organised public viewing area and I had assumed, the place to be. I entered with an open mind, determined not to blindly resent it. However, it appeared for whatever reason that most locals had stayed away. It was full to capacity but out of those in Brazil shirts - and there were many - barely any knew the words to the national anthem, revealing just how many gringos had adopted Brazil as their second team.

I left the Fan Zone after fifteen minutes and found the scenes on the streets much more as I had expected. Every bar and restaurant had people spilling onto the pavement, straining for a view of the action. Street corner barbecues encouraged gatherings around tiny television sets; viewers taking it in turns to readjust the aerial for a better reception. This was more like it. When Brazil scored their equaliser the place went berserk. The explosive barrage of fireworks was drowned out by the delighted screams of a nation and the significance of the occasion hit me like a train.

My World Cup unfolded in much the same vein: dipping in and out of protests while sustaining a complicated love-hate relationship with the whole affair. Most days were spent either shooting or editing my films (FIFA and the Perfect Con) and most nights involved reluctantly declining invitations to go out drinking due to the workload and early starts. Unfortunately, the limited time I had set aside for 'enjoyment' coincided - in a very non-coincidental and all too premeditated way - with England matches. Considering this wasn't the first time I'd followed England to a major tournament, I should've known what to expect.

The disappointment after scooting across to Sao Paulo full of hope that we could perhaps scrape a 0-0 draw against the Uruguayans was somewhat sweetened by the enormous nightly street parties. Fans from every nation - even non-participating ones - gathered to mingle, sing, drink and dance through dawn. Street vendors provided chilled beers and spirits from cool boxes while bass-loving locals showed off their vehicles' sound systems, parking up to provide tunes from car boot discos. 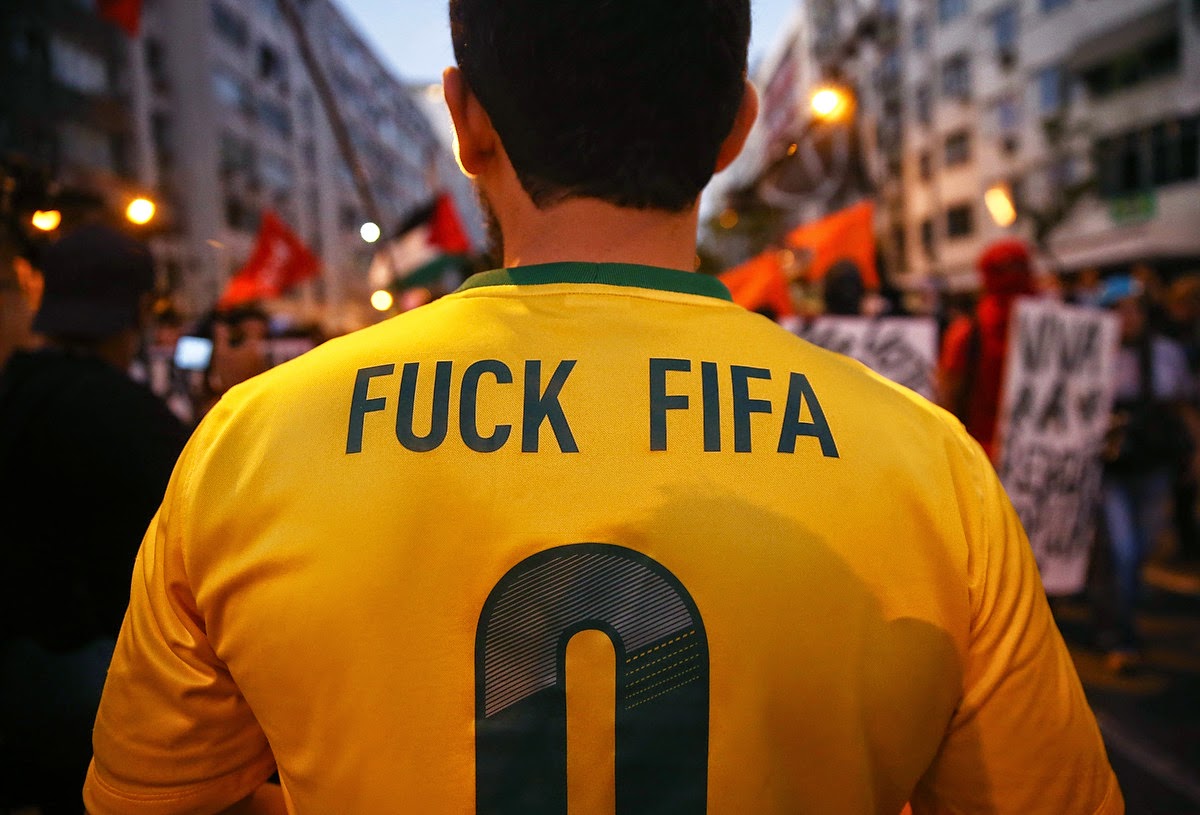 Throughout the journey I was pleasantly surprised to discover that even the most fanatical flag-waving, horn-blowing Brazilians were willing to voice their anti-government and anti-FIFA opinions. Few, it seemed, supported FIFA's event unconditionally. Of those who chose to protest some opted for high-impact methods while others went for subtlety, like the red card protest on Copacabana (somber looking folk lined up displaying red cards to FIFA) or the theatrical open heart surgery carried out by a mock surgeon wearing goalkeeper gloves (in response to the state's prioritising of football over health care).


Perhaps the most poignant metaphor of all, however, was an accidental one. I've since learnt that two of the three aforementioned doves released before kick-off didn't make it out of the stadium alive, reportedly crashing into the roof structure in blind panic. Not only does this obviously make a mockery of the whole gesture but it is characteristic of FIFA's World Cup on a much broader scale: everything looks great for the cameras, but reality is heartbreakingly different.

Originally featured on filterview.tv you can now watch all three parts of FIFA and the Perfect Con combined on Vimeo:

Posted by Ryan Chapman at 11:35 No comments: