I never imagined myself blogging about the Labour Party. Never before a Labour voter - with a lingering mistrust for the party on account of Tony Blair - I raised an eye-brow when Jeremy Corbyn received the nominations to ‘broaden the debate’ and have since paid close attention as he’s blown it wide open.

For those who don't know - but, I suspect if you've got this far, you will - Jeremy Corbyn is one of four candidates hoping to take over the reins from Ed Milliband and mount an offence against the Conservatives in the next election.

From what I've seen - countless grillings on news programmes and about a dozen leadership debates (nothing much better to do before the football season kicks off, evidently) - the other three candidates are basically the same as each other: staunch Blairites with some suspiciously Tory-esque persuasions. 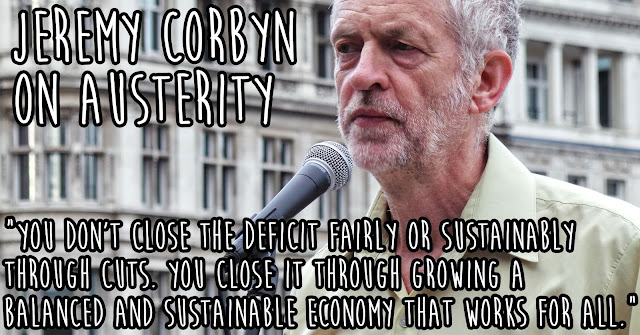 Corbyn meanwhile, is offering something different. Hoping to rebrand Blair’s New Labour as Corbyn’s True Labour, he has amassed a passionate following: going from 100/1 outsider to odds-on favourite in the process ("the biggest price fall in political betting history" say William Hill)

It is often said that his politics are too left wing for the British electorate to vote for. This primarily being because he stands so vehemently against austerity and all the associated cuts to welfare and public services. He also actively promotes nuclear disarmament, environmentalism and poverty eradication, so I'd say if you disagree with him you're not paying enough attention.

It's probably true that if the election were tomorrow Labour wouldn't win with Corbyn at the helm. But, the election isn't tomorrow: it follows five years of Tory rule and it'd be absurd to suggest Labour would win with anyone in charge right now given how spectacularly they failed just a few months ago.

In my view, people are too easily trapped in the short-termism that plagues politics. Say Corbyn did become Labour leader, yet failed to win the election in 2020: wouldn’t it at least be a good thing that Labour shifted to the left and back to their roots? Wouldn’t it at least build the foundations for a more equal, sustainable and peaceful future? Wouldn’t the next Corbyn be right behind Jeremy looking to continue the fight?

He hasn't come from nowhere, either. David Cameron had only been an MP for four years before he was handed the keys to Number 10. Corbyn, meanwhile, was elected MP for Islington North in 1983 - when Cameron was still at Eton revising for his A Levels - and has remained the voters' choice in his constituency ever since. That's thirty-two years.

Experience aside, his manner, his conviction, his honesty; they're all refreshingly likeable. He doesn't make me cringe (Ed Milliband), he doesn't make me want to throw random objects at the television (David Cameron) and he doesn't make me bring up little chunks of sick in my mouth (Nigel Farage). He ticks every box.

Most of all, I like the way he sticks to his principles, unlike his counterparts who seem to pick and choose what stance to take based on whatever they think will make them the most popular. There's a Tony Benn quote - the one Mhairi Black referred to in that maiden speech - that better articulates this than I ever could:

"I admire anyone who speaks their mind whatever their party and divide politicians of all parties into two categories: the signposts who point the way they think we should go and the weathercocks who haven't got an opinion, until they've studied the polls, focus groups and spin doctors."

Jeremy Corbyn is obviously a politician for the people. He’s not afraid to stand up to the establishment on behalf of his constituents; he doesn’t rinse taxpayers for expenses; and he deals in the politics of hope, not fear.

Moreover, he's the most sturdy of signposts while it seems to me his leadership rivals are nothing but weathercocks flailing hopelessly in the swirling wind of a politically diverse electorate.

Posted by Ryan Chapman at 13:25 No comments: