The Perfect Con: Plotting the Map and Bridging the Gap

In January I blogged about my project, FIFA and the Perfect Con. The first thing to say is that I have launched a crowd-funding campaign to help bridge the funding gap. All you wonderful people can contribute from £3 by clicking here. More on that later. For now, please take a couple of minutes to watch this teaser, featuring Tim Vickery and somewhat embarrassingly, me:

The project is now going to take the more web-friendly form of a series of short films. Later on, once the commotion of the World Cup has passed, I plan to develop a longer stand-alone documentary but for now, expect bite-sized chunks telling the story as it unfolds.

Brazil is at a cross-roads and one thing is clear: the nation is divided. When one person complains that too much public money is being spent on stadiums and not enough on hospitals and schools, another will argue for the economic benefits the World Cup could bring. When a family express horror after being forcibly evicted from their home, another may express sympathy but will ultimately conclude that it's a necessary side-effect of 'progress'. It remains to be seen whether the football itself will be a unifying force, but one Sao Paulo resident has suggested that emotions are running so high that "if Brazil don't win the thing now, there will be hell to pay." No pressure then, lads. 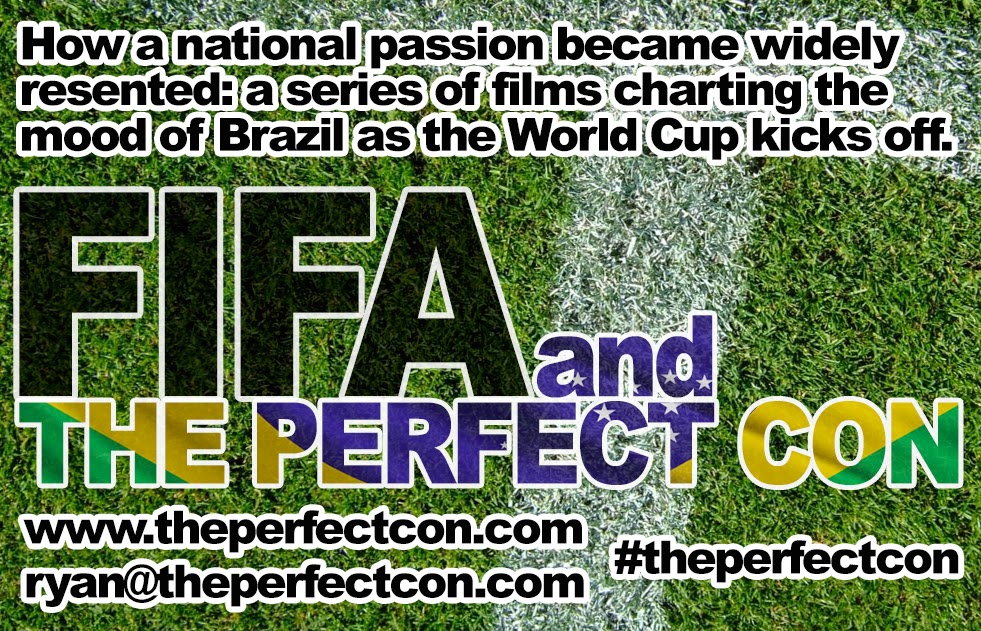 Over the last several weeks I've taken on as little paid work as I can get away with and have been spending time researching the volatile situation in Brazil, devising my route around the country, and planning the logistics. I will begin in Salvador and visit three other cities central to the story: Brasilia, Rio de Janeiro and Sao Paulo. In each location I'll be meeting people directly affected, people heavily involved in the widely reported anti-government protests, and those with authoritative opinions on the subject.

As you'll see from the teaser, production has already begun. Just the other week I interviewed Rio-based journalist and Brazilian-football-know-it-all, Tim Vickery, who was in the UK for the Easter break. In an attempt to make the setting appear less London-y we met in the exotically named Copacabana Beach Bar - in the basement of a Brazilian owned drinking den in Camden Town called Made in Brasil (check it out, their Caipirinhas are incredible).

Though I've saved vigorously, I am need of a little help to get the films to the high standard I know they can be, and so have launched a crowd-funding campaign. There's an important distinction to make here that I don't want to make any money from these films and none of the contributed funds will go on food, accommodation or anything like that. It'll all go directly into the film project itself.

If you'd be happy to spare a few quid, please visit my IndieGoGo campaign page, here. A contribution of £3 will be rewarded with your name in a scroll-of-thanks at the end of each episode and there are other perks for contributions of £10, £30 and £75. For the latter you'll not only get your name in the credits but receive a personalised postcard of thanks from Brazil (or Cambridge if you'd prefer!), a DVD of the finished product and I'll take a football shirt with me and donate it to a disadvantaged child in Brazil on your behalf.

Here's is a summary of what perks are offered for each contribution:

The crowd-funding campaign will be running up until the World Cup kicks off and any contribution would be gratefully received. Thank you!

Posted by Ryan Chapman at 13:23 No comments: