As Theresa May constantly loves to remind us, there's a very clear choice in this general election. That choice basically boils down to continued austerity with the Conservative Party, or the end of austerity with Labour.

Since 2010, government austerity measures have led to ravaged public services, increased levels of inequality and the largest decline in living standards since the 1920's. But none of this has been an accident: that's exactly what austerity is supposed to do. This is not a flaw in the system, it's a built-in design.

From education to the arts, infrastructure to health, and children to the elderly. Nothing and no one is safe from the ever-tightening government purse strings. They argue it's simply “living within our means”, but does it actually have to be this way?

Austerity Britain is a series of short films that challenge the claim that "we're all in this together", exposing the 'culture of cuts' as a counter-productive ideological obsession. The first part is due to be out on Sub Productions this Friday, but for now you can view the trailer here:

As we approach this general election the tide is turning. People are starting to realise they've been lied to. Cutting through the bullshit requires a certain level of commitment, but more and more people are taking it upon themselves to get responsibly informed, and that's being reflected in the polls.

Consider how Labour's popularity surge coincides with the broadcast impartiality rules of a general election kicking in. When people are presented with a more unbiased, balanced view it's clear whose brand of politics is more popular.

Consider how the Conservatives didn't once encourage voter registration in the run-up to the deadline through their social media channels. This tells you everything you need to know: a poor voter turn-out works in their favour. Their mindset is outdated. They don't represent a modern society.

Consider how Labour's policies are resonating with the public and - in sheer desperation - the only ammunition for a counterattack comes in the form of stuff Jeremy Corbyn said decades ago, knowingly taken out of context.

If the tide doesn't turn quite in time for this election, it surely won't be far away. Until then we must endure the rotting corpse of conservatism, but it's only a matter of time until a more progressive, inclusive and compassionate brand of politics takes hold. 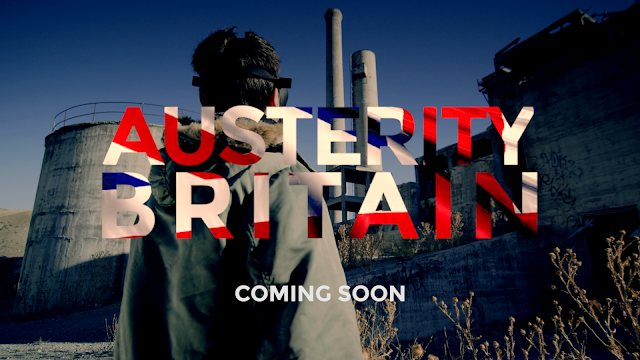 Posted by Ryan Chapman at 17:32 No comments:

I'd barely had time to relapse on this new year's futile collection of resolutions before I was off on the first shoot of the year: first to Devon and then to Wales.

The first location was a rundown warehouse in Exeter. As cold as it was gritty. We were there to shoot British trials bike champion Andrei Burton who has commandeered a corner of the otherwise derelict warehouse for training. If you don't know what trials bike riding is, imagine using a bicycle as a pogo-stick to jump impossible distances and you won't be far off. What's more, it's even harder than it sounds.

Andrei navigated the course of stacked wooden pallets and logs with ease. He's clearly at the very top of his game, which is just as well as we got him to repeat the course a few dozen times.

It's the sort of talent you struggle to even comprehend, let alone consider attempting. Eventually, I was pressured into trying the most basic of 'tricks': the track stand (the basic act of balancing on both wheels on flat ground) and failed hilariously. Meanwhile, I'm fairly certain Andrei could literally track stand in his sleep.

Here's the behind the scenes video that I shot and edited, followed by the video of Andrei culminating in a pretty crazy rock jump on a Devon beach (Directed by David Newton, edited by me)

Leaving Devon behind, we headed to the notoriously wet Elan Valley in mid-Wales to shoot a staged Top Gear-esque race between a road biker and a mountain biker. The former sticking to the road, the latter taking a more imaginative cross-country route, both culminating with a sprint finish across the top of Craig Goch dam.

On Day One in Wales we recce'd the route and were taken aback by the stunning Victorian structure; built in 1897 to supply Birmingham with water (73 miles to the east). Water was gushing dramatically into the reservoir below, and we couldn't wait to get back later in the week to shoot the race's finale.

However, when we returned to shoot the scene, the gushing had been reduced to a trickle and by the time the camera was rolling it was as good as dry. Still, there are some things you just can't control, and luckily the weather was as dry as the dam.

If you're dying to know who won the 'race', check out the video below (again, directed by David Newton. Myself: second camera and editor). You will recognise the mountain biker from the videos above. Give that man any bike, and he will ride it.

Posted by Ryan Chapman at 10:44 No comments: